There is no story of what Carol and Roger King used to do before farming and wine making (boring), there is only the story of where we started and where we are going.

Founded in 1989 as Ledgewood Vineyard a bare 100 vines were planted at our home property at Mankas Corner in Suisun Valley.  Merlot was the single variety, it seemed to make good sense well before the movie Sideways (and we never planted Pinot Noir).  Grapes were sold and a little non commercial wine produced.  Vines were added over the years to create a one acre block.

Then in 1998 a call from over in Pleasants Valley seeking help lead to a long term management of Shale Peak Vineyard, a small 2 acre block but offering incredible Sangiovese, with some Cabernet Sauvignon and Barbera. To our dismay the well, always being problematic, went dry during the five year California Drought and we sadly left this most difficult site. Aaah! the fruit was outstanding when allowed.

In 2000 a small quarter acre Cabernet Sauvignon vineyard was developed for friends in the southeast Napa mountains at 2,000 feet. Off the main hard volcanic rocks just one ridge west this small eastern facing block has grown magnificently.  This ultimately became the source of the Napa Cabernet Sauvignon.

The next expansion came in 2002, taking management and full responsibility for the 9.5 acre Gianno block, mid valley Suisun Valley, with Cabernet Sauvignon and Petit Verdot. After 16 years of management it was just time to slow down a bit and have stepped back from this block.

Vineyard scope was re-set and fine tuning variety placements have lead to grafting over at McMullin of Albarino, Grenache Blanc and a little more Petite Sirah, all reducing the Syrah planted earlier.

Beginning in 2010 an intriguing white project has been undertaken at the home block with grafting old historical CA white grapes Trousseau Gris (think Grey Riesling), Green Hungarian, Chenin Blanc, Chasselas Dore and Vermentino on 25 year old Merlot vines.  The objective is a rework of the historical CA jug white Chablis wines into a fresh new approach. It has been a journey but the block is properly field blended as of 2016 and beguiles.

A full conversion to exploring alternative verities has been launched, both as subject of scope and opportunity such small scope presents. Clients arrive seeking something hard to find or difficult to grow and we find ways to get there. 2019 will see the first Chenin Blanc berries from Gitsham block on a sloping hillside grafted onto older Zinfandel.

Assyrtiko, the great Greek white variety from Santorini, has been grafted into the most difficult wind swept hillside section of the Gitsham block in May 2019. Hoping to present more natural growing conditions for the Greek white (sorry no volcanic ash but some Tufa), the first wine is expected in the 2020 harvest. 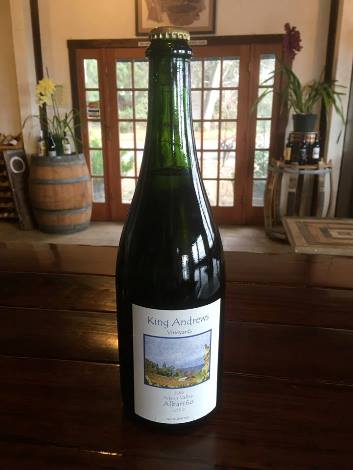 Without a doubt more exploration of alternative varieties will continue well into the future.  It has just been the curious nature we hold.

So taking another leap in Spring 2020 the Spanish grape Mencia (men-the-a) was grafted to this same hillside zone, another just released in the United States variety from Galicia, which will be the red compliment to our existing Albarino, also of Galicia.

In 2004 the first commercial wine was crushed and released in 2007, under the Shale Peak Vineyards label, known as Toscano di Solano.    The namesake King Andrews Vineyards label  (our married name and wife’s maiden name) graced our first Syrah bottling in 2005, then expanding to  Cabernet Sauvignon in 2007.  Albarino in 2008   Since then Zinfandel, Gamay Noir, Zinfandel and Muscat Blanc have been produced.

The wine making operation is small by design, limited in principle to roughly 250 cases a year.  More would require substantial sales relations in the market, so staying small and tasting room direct has been the desire.  It may sound counter intuitive to ambitious growth plans always expressed by wineries, but “Less is More” means it here.

Wines are sold at the Suisun Valley Wine Cooperative Friday through Sunday weekly or via email request.  Come by and have a taste!